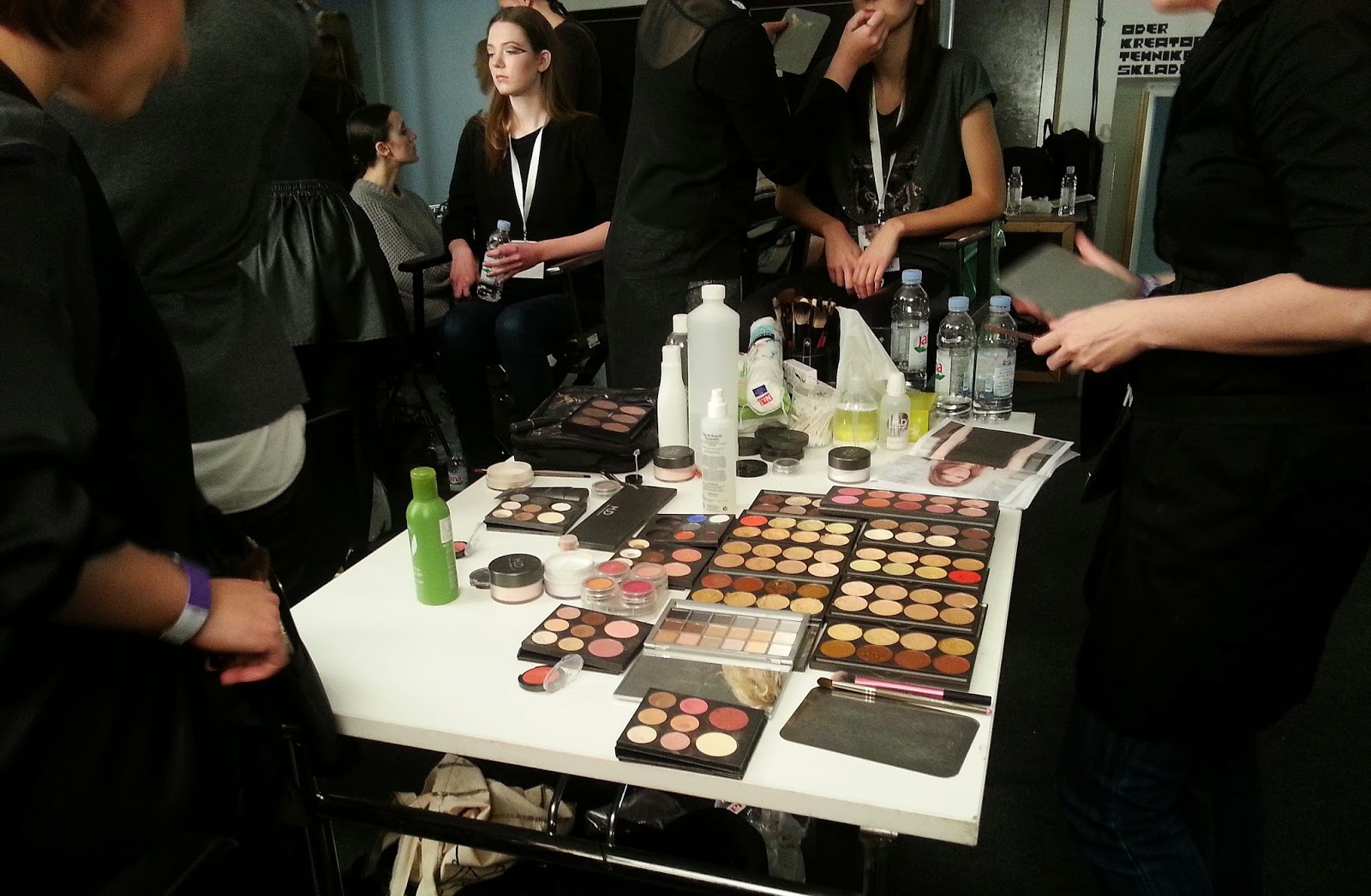 This week started on a very exciting note. I had an opportunity to be a part of Make-up Designory’s team of make-up artists at our fashion week, and as this is the only exciting thing that happened this week, it will be the focus of today’s post. I’m sure a lot of you are interested in what was going on backstage, right? So, let’s start at the beginning. We arrived at the location about four hours before the whole thing started and immediately started working. We were crammed in the hallway along with all the models and other people who were doing their own jobs backstage. It was very crowdy and hot, we had very little space for doing makeup, the lighting was not the best and I was full of nerves, since my social anxiety decided to pay a visit again, but the atmosphere was nothing like I’d imagined it to be. I thought everyone would be on the edge of their nerves and running around like crazy, but everything felt very relaxed. At least at our little corner. At some points it was quite hectic all around us, but I was so focused on doing makeup that I haven’t even paid attention to that. We were done with the first round of looks earlier than we had to be, so we even had some time to relax, chat, rehydrate ourselves and eat some strawberries before the shows started. It was in the calm before the storm, because once the shows started, everything changed. The backstage went mental. We all had to be totally quiet, the music was so loud that the whole place was literally shaking, and everything was happening with the speed of light. We had to change the looks of our models twice, as we were working for three different designers, and only had five minutes between shows to do it. Not to mention that the models also had to change clothes. As I have said, it was crazy, but we did it and it felt like the whole thing was over before it even started. You can check out the looks we did and the work of amazing designers we’ve been working for (Zoran Garevski, Dajana Ljubičić, Young@Squat) here, here and here. After the show, when we cleaned everything up, it was time for an after party. Unfortunatelly, I couldn’t go, as my mom’s friend was waiting for me to call her to come pick me up and take me to her place. I was staying with her over night, because there were no more trains to take me back home, and since I really didn’t want to be too much of a burden, I said no to the after party and only went for some drinks with the rest of the girls who couldn’t go before I called her to come pick me up. I honestly couldn’t ask for a better host. Not only did she drive me back to her place so that I wouldn’t have to walk or take a bus in the middle of the night, but she also cooked me a dinner at midnight, because she assumed I would be starving. Bless her. So, this is how the night ended: I stuffed my face with pasta, took a shower, chatted with my mom’s friend about how we don’t have any great stores in our country, and then went to bed. Overall, it was a great night that maybe even changed up my mind about the whole fashion makeup thing. If you’ve read one of my lifestyle posts a few months ago, you probably remember that I went through a bit of a crisis, but I’m now ready to give fashion makeup another go if an opportunity arises. Oh, and if you’re wondering whether models really don’t eat anything, I can confirm that this is not true. I mean, they had a pizza party in the backstage before the main shows started! Any other things you want to know? 😀

SONGS OF THE WEEK
Awesome songs from awesome people that are probably two of the nicest guys I ever had a pleasure of meeting.