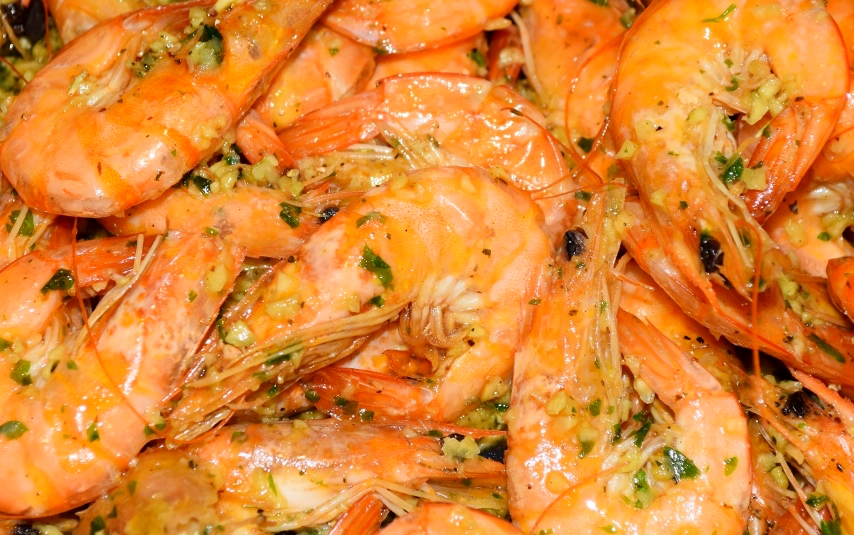 Now that I’m about to move to London, I’m frantically trying to learn how to cook all the dishes I regularly devour, but never actually prepare myself. The first on the list were my dad’s shrimps, which are to die for! Finger-lickable is the expression that best describes them. Everyone who tries them becomes obsessed with them. For some reason, I thought they were very complicated to prepare, so I always avoided the kitchen when my dad was making them, but boy, was I wrong. This is literally the easiest dish ever. It requires the sandwich-making level skills, yet tastes like something you would eat in a 5-star restaurant by the ocean.

The ingredients you need to prepare the dish for four to five people are:

♥ a handful of parsley

♥ 1 table spoon of Začinka spice mix (to find a similar product in your country, see how it looks like & what it contains here)

First, you’ll have to chop up the garlic and the parsley into tiny pieces. Once you’re done, you put them together into a bowl, add the mix of provencal herbs, the začinka spice mix, a few spoons of olive oil, and mix everything together. The mix shouldn’t be dry, but it also isn’t supposed to be overflowing with oil.

Then you put the mix aside and pour olive oil into a large skillet, so that the bottom is covered. If you’ll be preparing shrimps for one or two people, a large skillet will do, but you’ll either need an electric pizza pan or do several rounds to prepare the meal for a larger amount of people. We prepare the dish in a large eletric pizza pan.

After you cover the bottom with the oil, you throw in the shrimps. Make sure they aren’t frozen, but cooked and previously stored in a fridge. You leave the shrimps to roast for about five minutes until they are done on both sides. Of course, you’ll have to do some stirring in between.

Next, you add 2 dl of dry white wine, cover the skillet/pizza pan with a lid and leave the shrimps to stew for about five minutes before you take the lid off and leave the wine to evaporate.

Lastly, you throw the mix that you have previously prepared on the shrimps, squeeze on a half of lime, season the whole thing with ground pepper, stir and that’s pretty much it. Just leave the shrimps in the pan for two more minutes, so that they soak up all the ingredients. Easy, right? Will any of you be trying out my dad’s recipe? Please send me photos if you do and don’t forget to tell me how you liked it.

P.S. Before you shove the shrimps into your mouth, make sure to remove the head, the tail and the shell around the body. Oh, and prepare lots of napkins, because your hands WILL get dirty. 😀