I don’t often write negative reviews, as I prefer talking about products I love rather than those I’m not overly impressed with, but sometimes it just has to be done. The product I’ll be reviewing today is probably the worst I’ve ever tried. I feel morally obliged to share my thoughts on it, because it isn’t just one of those that don’t work (for me). It’s really bad. 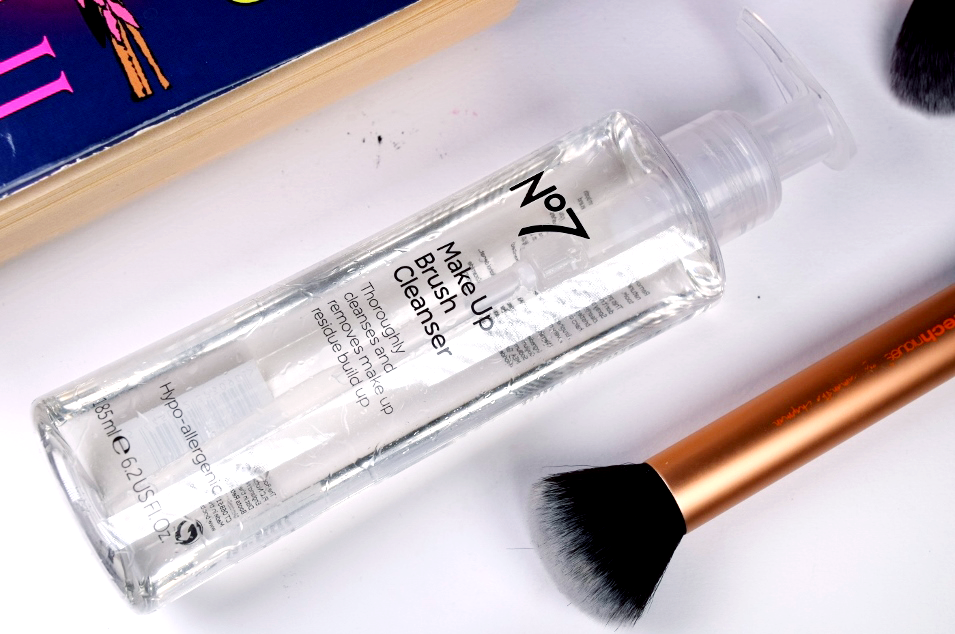 Spot cleaning my makeup brushes is something I’ve been doing ever since I enrolled into makeup school. When you work on clients and don’t have time to do the deep-clean or wait for the brushes to dry, you have to disinfect them and remove pigment before moving on to another person, which is what brush cleansers are essentially for. The process became such a habit to me that I now do it every single time I use my makeup brushes, even if I’m applying the same shades and doing makeup on no one but myself.

Up until my move to London, I’ve been using 99% alcohol, which works amazing. It removes stains, disinfects and dries brushes in an instant. But since it is quite hard to find, I went on the hunt for a drugstore brush cleanser instead. The only one I found at my local Boots was No7’s Make Up Brush Cleanser, the ‘star’ of today’s show.

I’ve used it three times, but wish I had listened to my gut and threw it in the bin the first time around. I have quite a few problems with it. First of all, my brushes take ages to dry when I use this product. I don’t even see the point in using it as a spot cleanser, because the brushes need the same amount of time to get dry as they do when I’m cleaning them with shampoo and water. And secondly, the cleanser literally ruins my makeup brushes. Every time I used it, my makeup brushes had hair falling out and that never happened to me before. The brushes were shedding like nobody’s business, the hair felt like it was glued together even when it was already dry, and the bristles turned scratchy.

What it does or doesn’t do to my brushes is not even the worst part, though. It’s what it does to my eyes that shocks me the most. Whenever I applied my makeup with the brushes I used this product on a day before, my eyelids turned red and started burning. The last time I used it, the skin on my eyelids was so irritated I could barely keep them open and it even started peeling! I still have dry patches left, but thankfully, they’re slowly disappearing with the help of Cicaplast Pro Recovery.

It’s mind boggling to me how this product is sold in stores. And not only that. It’s marketed as hypo-allergenic! Very confusing indeed. Have you had any similar reactions to a beauty product before?